Not a stone Buddha 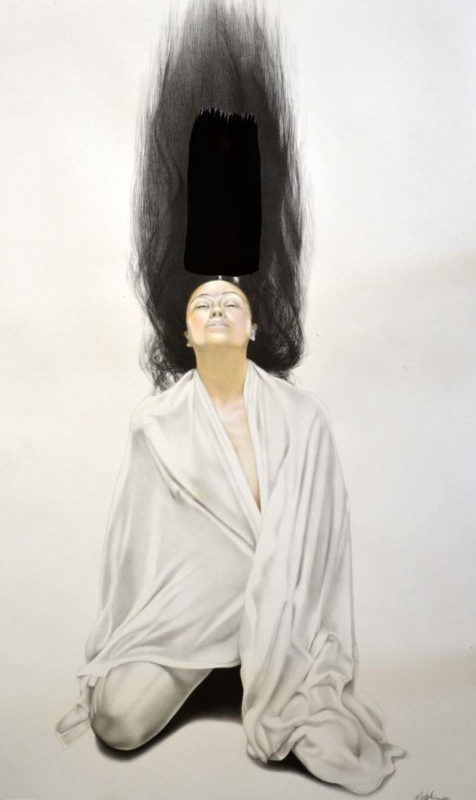 Portrait of a woman in meditation #01

I started meditation in the 1970’s in high school, with TM (transcendental meditation) and listening to, and reading Ram Das. I was clawing my way out from under my Catholic upbringing. Shortly afterwards I began a journey back to the Japanese side of my family. When I  was sixteen I started Karate-do, with Kobayashi Sensei (of course the teacher had to be Japanese) and from there came an adventure to a yoga studio to supplement my martial art training. My girlfriend and I went downtown to a big house on South New Hampshire. The door opened, and a white bald headed man in saffron robes said, “You are early, come on in.” My first thought was, ‘how do you do Yoga in that outfit.’

The main room had an enormous golden Buddha with painted face and black hair. This was no yoga studio! We meditated the whole evening. My friend grew more and more agitated as the evening went on, but I got more and more into it, as if my mind and body already knew something about this ancient technology of sitting, breathing, and observing. I sat like a ‘Stone Buddha.’ I came back, I was hooked.

My mother had started going back to Japan for months on end to visit our family in Kobe. When I was twenty-one I went with her. It was my first trip back to Japan since I was four. It was magical to see that I had a family who loved me so much, even though we were separated by language. My parents had decided to stop teaching me Japanese after we got back to the U.S. My mother was now on a mission, not only to reconnect me to all my relatives, but to take me to all the major temples and shrines in Tokyo, Kobe, Osaka, Kyoto and Nara, I saw many stone Buddhas. I even climbed inside many of them and looked out through their eyes! I felt for once at home again.

I may call myself a Buddhist, though I have practiced the teachings long enough to realize that there’s no such thing. True freedom has nothing to do with labels and identities.  I have been a teacher since the 1980s. I have co-founded our own school, which incorporates Vipassana, mindfulness and Zen with Hypnosis, NLP (Neuro-linguistic programing) Family Systemic Constellation, deep-time work, and Pyschomagic. We live, breathe, teach, mentor, heal and train people in this.

These images are a continued journey into my life of meditation. This series, ‘Not a stone Buddha’ means that I am now a living breathing, laughing, restless, angry, frustrated, dreaming, joyful, blissful, sensual, farting, peeing, shitting, hungry, critical, discerning, and altogether happy and deeply at peace with myself, awake being.

The first piece of this series was inspired by a dream. I was in a room filled with monks and nuns sitting at a long dinner table, everyone had their heads down on the table, fast asleep. I saw myself locked in a frozen scream, shouting at the monastic gathering, with my hair raised up straight above me. I was screaming, “Wake up!”