Somewhere in between breathing in and breathing out… 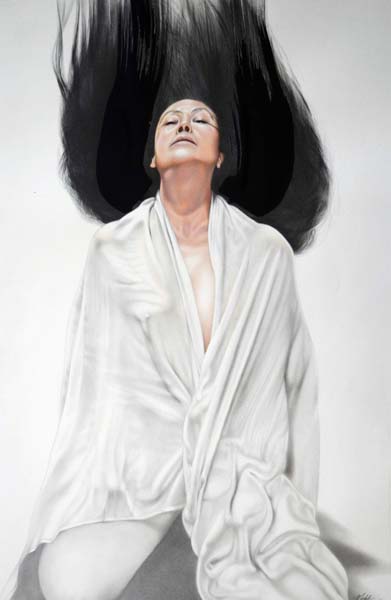 My first daylong meditation retreat was in the late 70’s at the International Buddhist Meditation Center in downtown Los Angeles.

I looked around the meditation hall for a familiar face and saw only my teachers and the enormous golden Buddha with his painted face and serene smile. I placed my cushion between an Asian American woman, and a European American man, and arranged myself in a seated posture, back straight and tall, knees and butt in a perfect tripod foundation on the floor… I was set.

The sound of the bell marked our first hour long sit, and a palpable moment of stillness and silence came over the entire room…

Shortly after that things changed.

The woman to my right started sighing softly, and then progressively louder and for longer periods of time. The rustling of her synthetic jacket came later as she moved her arms along with her legs, changing and shifting her posture with remarkable consistency and stamina the entire hour.

The young man to my left was a heavy breather. He started with an audible breathing in, and out, marking each breath…Yoga breathing, a noble and magnificent sound that later turned into a forced huffing and puffing as the hour progressed. Then his long legs began twitching and scrapping the carpeting as he tried to find a comfortable position.

After an hour the sound of the bell marked the end of the sitting meditation, and the beginning of a period of walking meditation in the garden.

Back inside sitting again, the silent meditators settled on their cushions. Another bell sound and another hour long meditation session with my companions to my right and left repeating their sequence of sound and movement.

This went on all day long!

I sat like a stone Buddha throughout it all.

I was so still that I could hear every movement and sound outside of me, and inside me.

My heartbeat slowed down and then went faster in response to the apparent discomfort of my companions on either side. I felt for them.

My body was like a Buddha, but thoughts and emotions streamed through like a whirlwind, tumbling and turning. Images, memories, fantasies. My entire life was magnified inside my head, and my head felt like it was ready to explode. I felt as if I was on fire, a volcano of emotions. It went on for what seemed an eternity. And still I did not move a muscle. If indeed the whirlwind started to abate, it was only out of sheer mental exhaustion.

This continued all day long, until the final bell marked the end of the daylong. An inner calm came from deep inside of me that I had not experienced before. I felt a mixture of compassion and awe for my two sitting companions to my left and right. There remarkable stamina, despite their apparent physical discomfort. They had stayed with it!

The whole day was conducted in silence, so when I finally talked to the woman and man sitting on either side of me they were amazed at how I could sit so still, and I responded that I may have been still on the outside, but on the inside I was filled with inner turmoil, unresolved emotion, and unexamined suffering.

Inside of my stone Buddha exterior I was wrestling with a lifetime of pent-up trauma in my mind/body.

The meditation we were taught that day was to simply focus on the breath. Somewhere between breathing in and breathing out there was a still center, a quiet where everything stopped, where the noise became quiet.

My breathing was an anchor in the vast ocean of my human experience.

The second piece in the series of paintings and drawings from a portrait of a woman in meditation is dedicated to my first deep experience in the Dharma.

“Somewhere in between breathing in and breathing out…”  Pencil, colored Pencil and Sumi Ink on Paper 48”x 33”