Not all ecstasies are the same 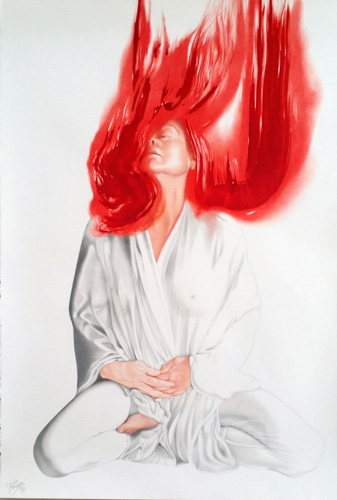 The day I started meditating my father freaked out.

I was twenty, still living with my parents, but not spending a lot of time at home. My father, a devout Catholic imposed his religion on the whole family. There were no choices in his household. I was shaped by a strict catholic upbringing. So why was I doing this strange thing of sitting cross-legged on the floor, with eyes closed, and not moving for an hour at a time?

I’m sure my meditating freaked my mother out too.

Before she met my father, like most Japanese, she was Shinto-Buddhist. However, in Japan, sitting meditation was something only Zen monks did. She thought I was crazy, while I found the idea of my mother converting to Catholicism perplexing and disappointing. I appreciated her response to my meditating a whole lot more than my father’s though. She responded by taking me to Japan on her next visit there, meanwhile my father seriously considered getting me an exorcism.

We lived in a small house and I practiced meditation in a room I shared with my sister. I meditated while the TV was blasting in the next room. I meditated through the constant neighborhood barrage of sounds, police and ambulance sirens,  horn-calls and the music of daily food trucks, loud boom-boxes and car stereos parked in front of our house, kids playing kickball from the apartments across the street, older local gang kids yelling at one another, sometimes ‘throwing down’ in the middle of the street, our next door neighbors’ fighting-dogs barking, snarling, yelping, and screaming in pain as they fought; not to mention the frequent arguments and shouting matches between my mother, father, and sister inside our home.

My Dharma practice, was so much more than just sitting cross-legged on the floor and focusing on my breath. In the early 80’s it wasn’t even called ‘mindfulness’, nor was there any focus on using meditation for stress reduction. It was all about Freedom from Suffering, Liberation, and ultimately attaining Enlightenment. This made total sense to me at twenty. My life had been, and was still, chaotic and crazy, and even dangerous at times. I clung to my Catholic faith, and now I was adding meditation to the mix.

I liked this style of Vipassana practice because it was simple, clear, and direct. It suited me perfectly. My teacher wondered why a twenty-year-old like me, an artist, a martial artist, with a range of interests, wouldn’t be better off in a Tibetan Practice. He kept introducing me to other teachers and teachings, especially Chogyam Trungpa Rinpoche. Even though I loved Trungpa’s writing, and read all of his books, I said to my teacher, “You are stuck with me.”

This practice enhanced my already street-smart and wise young soul. But it was on my first weekend residential meditation retreat that my world view changed completely. The retreat was in the high desert near Joshua tree, three hours outside of Los Angeles, at a place called Dharma Dena. There were about thirty-five of us on the retreat. The first thing my teacher did was to ask for our car keys, which made my friend, who had driven with me, very nervous. We were stuck for the weekend with no escape!

After the first full day of meditation it was time for my interview with the teacher.

I walked into the small space and sat down; my teacher was smoking a cigarette, and as he spoke he began blowing the smoke in my direction, which made it hard for me to concentrate on what he was saying. He asked me how my practice was going, and I told him about my experience with the retreat and how much I enjoyed meditating in silence for the whole day. Then he became confrontational. He asked me about my Catholicism and began challenging my beliefs and picking apart all of my cherished convictions. It was exhausting. My mind was still fighting for what I had believed all my life to be true. Something snapped. I felt stripped of everything that had been most precious and sacred to me. In that moment all of my Catholic beliefs and conditioning crumbled to dust. I was left with a feeling of weightlessness, my mind free and open.

When I left that little interview room I felt a surge of anger and outrage. It rose up in me like a huge wave. All my beloved and treasured beliefs, everything I thought important and necessary, was gone forever, in just fifteen minutes with my teacher! How I hated him!

I remember walking out into the desert, away from the buildings, and screaming at the top of my lungs, cursing his name over and over again. As I screamed I also felt strangely uplifted. The burden of having carried those beliefs for so long was gone.

It was a strange and decisive evening, a turning point. I could not go back to who I had been, or to my old way of seeing the world. I was free, liberated; it was my enlightenment moment.

So now what?  I thought of the words of Chogyam Trungpa, “The bad news is you’re falling through the air, nothing to hang on to, no parachute. The good news is, there’s no ground.”

Years later my father apologized to me for his negative reaction to my practice of meditation. He even came to incorporate meditation into his own Catholicism. My mother learned to accept my meditation as part of who I am, especially after our visits together to the temples of Kyoto and Nara. Once, towards the end of her life, while we sat together on a bench in Santa Monica, watching the sunset over the ocean, she turned to me and said, “You are so easy to be with!”

My third piece in the series of a portrait of a woman in meditation marks a moment in my life when I realized that, ‘Truth is What is Useful’, that our beliefs are not static or fixed, they are stepping stones on a path to becoming more awake, aware, and liberated.

This piece is titled “Not all ecstasies are the same” 46” x 28” Graphite, Colored Pencil and Ink on Paper.