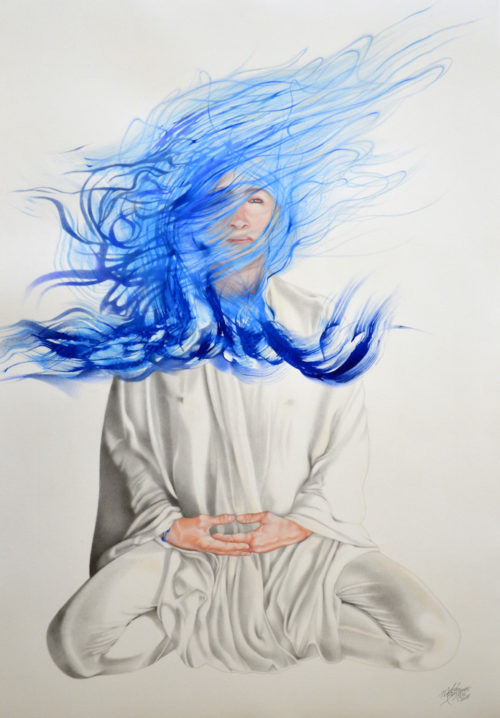 This drawing titled ‘Sky Gazer’ is part of a series of work titled ‘Dynamic Meditation.’ Pencil and colored pencil and ink on paper 36” W x 48” H. The piece has just sold and I have limited edition prints 11″ x 17″ signed, 100 run, available. Contact me at mbm@fivechanges.com

I woke up to the sound of bells, the images from my dreams still clinging to me along with that delicious lightness of being you get when you are in between dreaming and waking up. The colorful dancing horned toad lizard was still whispering his musings in my ear.

I was on retreat, teaching at Spirit Rock Meditation Center in Marin County. It was the first morning of ten days of silent meditation and practice, and it was time for breakfast.

The morning fog was thick and low to the ground, and there was a chill in the air as I walked slowly down the long slope of a driveway towards the dining hall. People appeared out of the mist, walking as if they were in a hypnotic trance.

The hills were alive with birdsong. The turkeys, deer, lizards, and even coyotes all came down to witness this parade of people walking so slowly and attentively.

It was then that I became aware that I was being observed and watched.. but by whom..

By the time I was half way down the slope, time seemed to slow down almost to a standstill. The air was still. The animals and birds were silent, and we all felt it. There was an unknown presence looming over us.

I saw her perched like a great stone statue on top of a grassy slope above us. Her muscular body was completely still, watching us with every fiber of her being. As we walked towards the dining hall I felt her gaze, alert for any lapse of mindfulness, any careless step, any distraction of mind. Her Tigress eyes were sharp. Her body was ready to leap and devour anyone of us the moment we were distracted by a wandering thought, or a careless daydream.

The wild turkeys and deer were nowhere to be seen. We were the prey now. One by one the tigress picked off those not up to the task of sustained awareness. She devoured our distracted mind, consumed our complacency, our disappointment and anxiety.  She ate her fill, and was gone.

I found myself standing at the door of the dining hall with a sharp keenness in my sight and sense of smell and hearing wondering what I had just experienced. Inside the hall people were eating breakfast in silence. The smell of spices, oats, grain, fruits, and fresh brewed coffee filled my nostrils. I sat down to eat my breakfast and saw the whole universe gathered on my plate. I was more than being fed, I was changing shape..

I soon forgot about the morning’s events, the taste of breakfast lingered on my tongue, my belly still warmed by the food as I made my way back up the long sloped driveway. The sun was out, and the animals were nowhere in sight, just an occasional lizard warming its body in the sunlight. I saw a brightly colored dancing horned toad lizard. Was I still dreaming?

It was my turn to lead the morning meditation. I sat in the large meditation hall. The sun streamed in through the many windows lighting the faces of the meditators while my voice guided them to focus awareness on their body and sitting posture. ‘Be aware of the sensations in your body, coolness, heat, tingling…And the pressure and contact of your body on the cushion, chair… The position of your spine…’

I began to notice an unfamiliar growl in my voice. Some of the students at the front of the room seemed uneasy.

Forty minutes into the meditation, I opened my eyes. The sun was still low enough to cast long shadows across the room. Then the shadows began to separate from the bodies of the meditators and move, taking on a character and shape of their own. Some of them no longer resembled human shape. I watched as they began dancing around the room, some fighting with another shadow; others flying through the air like trapeze artists, hanging from the ceiling lights, and some who had noticed that I had become a tiger, leapt out of the windows!

Then, when I rang the bell, everything stopped.

Ten days became like one long day, without reference points. Past, present and future became intertwined.

Sitting in the large meditation hall on the last morning of the retreat, my hand reaching for the bell to close the very last sitting meditation period, I witnessed a most marvelous thing. The faces of the meditators in the room began to peel away and fall to the floor like masks. Each face was shining bright, open and exquisite!

It was time for walking meditation outside, and I watched as the meditators floated out of the room like clouds moving in a big sky.

I sat down, perched on the mountain top. It was a sunny morning. Gazing up at the blue sky through my tiger’s eyes I saw ten thousand shades of blue. My body was like the green fertile rolling hills and valleys in the distance. My mind became like water, still, yet flowing, calm and bright. Turbulent thoughts came fluttering around me like waves of hair around my face, yet my gaze was undisturbed, far reaching, and bearing witness to this miracle of life.